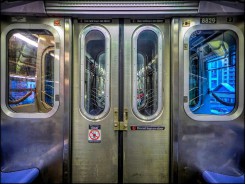 Benny grew up in an orphanage in New York City.  He was born in the 20’s and was placed in the orphanage by his mother, who had just gone through a divorce and could not afford to raise a child. Although he spent some time in and out of foster homes, Benny always landed back in the orphanage.  It was from the orphanage that Benny headed out into the world and enlisted in the army.

Benny told me about his life growing up while half-heartedly eating his bowl of cornflakes with sliced bananas. We sat at a small table in his modest, one-bedroom apartment, sparsely dotted with furniture. Pictures of family were scattered in different places around the apartment. His memories bubbled to the surface on many days, but on others slipped away and became vague and elusive.  Today Benny’s mind was sharp and he could recall many of the details of his life in New York, the orphanage, and the service. Today Benny told me about the “sliding doors.”

Benny explained that everyone in New York knows that when you take the subway you learn that once the doors close, you aren’t getting on that train. There is no stopping those sliding doors, no changing it if they close right in front of your face. If you’re a foot away or a few inches away and the doors close, you miss your train. That’s it. But Benny said that’s okay. That’s God’s way of letting you know He has a different plan. It’s God’s way of saying that if we get on that train, we might be derailed further down the track, or maybe it’s the wrong train altogether. Either way, when we experience those “sliding doors” we need to trust that it is always for a reason.

Benny went on to describe one of the more memorable times he experienced sliding doors. He told me that after his basic training in the army he returned to New York for a short furlough. The day before he was to report back, his mother got in touch with him and asked to see him before he shipped out.  He had mixed feelings about this and was anxious to get back to his unit, but ultimately gave in and requested an extra day of furlough, which was granted. His furlough ended, he returned to camp, and was assigned to a different unit because his unit had been shipped overseas without him. He was sad and disappointed because he had made very good friends during basic training and would have preferred to be with them. A sliding door.

Benny was sent overseas with a different unit. Within a short time of being there, Benny learned that his friends from basic training, the unit that he should have been with, were sent from the U.S. directly to Normandy. The entire unit was wiped out and all the soldiers, his friends, killed in what has come to be known as “D-Day,” the famous Battle of Normandy. That extra day of furlough, that sliding door, saved Benny’s life.

People who provide care to aging individuals in their homes are often on the receiving end of some incredible stories about love and life. Sometimes they come in the form of colorful, descriptive tales, other times in snippets of memories that we piece together over time to get the whole story. And occasionally, we get deeply moving lessons about life that we carry into our own lives from the very people whose memories are slowly slipping away.

I was not to see Benny again because he was transferred to a facility that could provide the added memory care he needs, but I will never forget him. I think of him every time circumstances in my life present me with a possible “sliding door.”